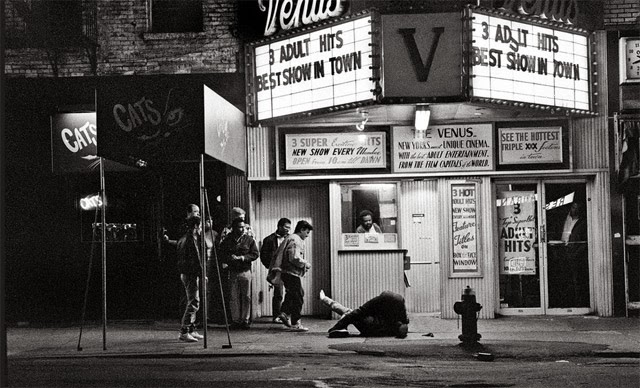 8th Avenue in the 1980s. Photo © Matt Weber, used with his kind permission.

Matt Weber, a brilliant street photographer who started out photographing gritty New York street scenes from his cab and has since moved on to the two-footed approach (check out his site), learned last week that Joe Lhota, who is running for mayor of New York City (and is not doing well in the polls), used one of Matt's photos in a controversial political ad that continues to run on local TV stations. Without getting into the politics or claims of the ad (which, for the sake of this post, are not relevant), let's just say the Lhota campaign did not purchase the rights to use the image, shown above. His campaign simply helped itself.

I finally saw the ad early this morning while working out at the gym, and almost fell of the treadmill. The photo is smack in the middle of a montage showing a violent, lawless city back in the days of black-and-white film photography, and claiming that if the other guy wins, similar good times are yet to come.


Weber was hopping mad, as were many of his fellow photographers. Not only was it out and out stealing, but it was used to illustrate a negative campaign ad for a candidate who he didn't support.  As one of Matt's Facebook friends wrote on  his timeline, "the irony is that it's an ad that says Lhota will be tough on crime."

A story posted on October 17 on the Gothamist quoted Weber as saying "I am a Democrat, but this is way beyond political as I have now been documenting New York for thirty years, and I'm concerned with people not paying for photos and even worse, stealing them. I am also very upset at having my work help someone I do not intend to vote for, especially since the image was stolen!"

Apparently, Weber wasn't alone. Richard Sandler and Eli Reed were among other photogs whose works were stolen, apparently taken from Flickr—and the Lhota campaign could have easily figured out who the photographers were doing a simple Google Image Search.

All that was reported last week, but now, it appears, all's right with the world. I spoke with Matt this morning and he reports that after contacting the Lhota campaign, "they came to my terms quickly. I turned down their $1,000 offer. I knew that Lhota wouldn't exist after Nov 5th, so I asked for $2,500 and also contacted Richard Sandler, whose picture was [also] stolen. He got the same amount. If the polls had been neck and neck, I would have just insisted that the photo be removed, but its so lopsided that getting paid seemed OK."

"Funny thing is many people have told me that I post photos which are too large because they could be stolen, and always reply: '"At least I'll get paid for a change.'"

"Now I need Nike or another corporation to lift one of my images and then try and disguise it in Photoshop," he quipped.

So, fellow street shooters, if someone steals your photos, go after 'em. Apparently, it might be worth it!