My first online street photography class, which I'm teaching online at the Bryan Peterson School Of Photography, is underway, after a four-year hiatus. It's heading into its third week. I'm loving the challenge of turning curious photography enthusiasts into qualified street shooters. Some of my students are struggling, some started to "get" it immediately, but the most gratifying experience is to watch a student have an "Aha!" moment. That started happening this week.

(Registration is open now for the June course, which begins on Friday, June 5.)

Here's how my class works: Students read a lesson in which I talk about various aspects of street photography. I share my techniques, provide examples and videos that hopefully help my students get a sense of how to approach total strangers and photograph them in public places without their awareness. Then they get an assignment: walk down a city street, take pictures using my techniques and theories. Each week students submit five photos, and I critique them.

This is where I see students grow. Most start cautiously and become braver as the weeks go by. Some don't really get what I'm asking them to do visually, and have a tough time unlearning the more traditional rules (what rules?) of composition that they've been taught elsewhere.

But by the second assignment, I start to see breakthroughs.

Take Julie Davis, one of my current students. Here was one of the shots she initially posted for critique this week: 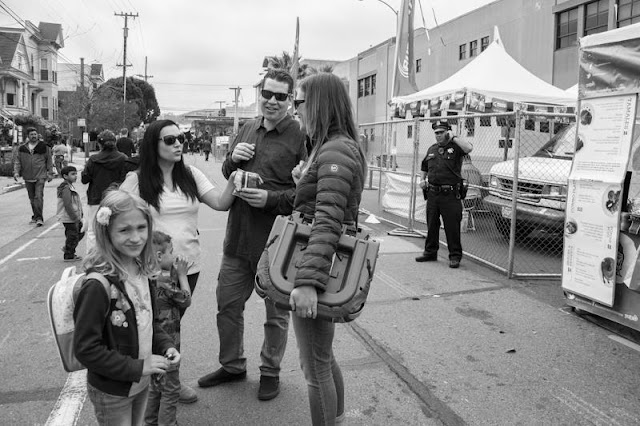 My comment for this image was: "While this doesn't quite come together, it's a very good attempt. Look at the whole picture, and all of the elements within it: The girl, the three people talking and their body language, the cop in the background on his cell phone, the pavement lines, power lines--everything that tells the story of this image. Watch how these elements either play off each other or create humorous or surprising juxtapositions and contrasts. Develop your peripheral vision and anticipation skills. Notice things going on down the block and anticipate what might happen as you walk towards it, or they walk towards you."

Her response? She posted a different photo from the same day. ("Maybe this is better?" she asked) 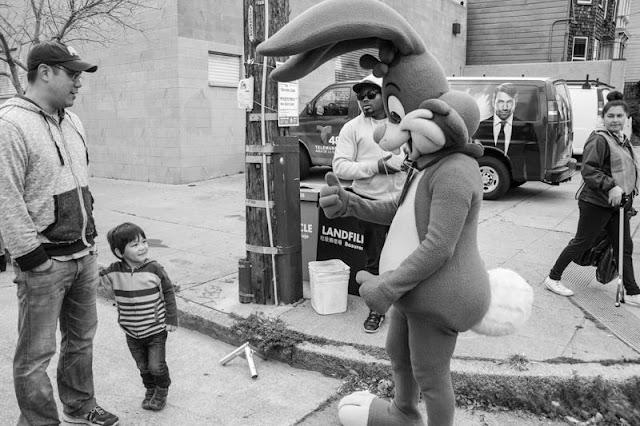 What a difference! Everything comes together here—the incongruous interplay between the people in the background, the rabbit, the father and son, and the person's picture on the side of the van, all work together nicely. I can't wait to see what Julie submits next week. For her, I hope this is her "Aha!" moment.

More student photos from this week that I really like (all reproduced with their kind permission): 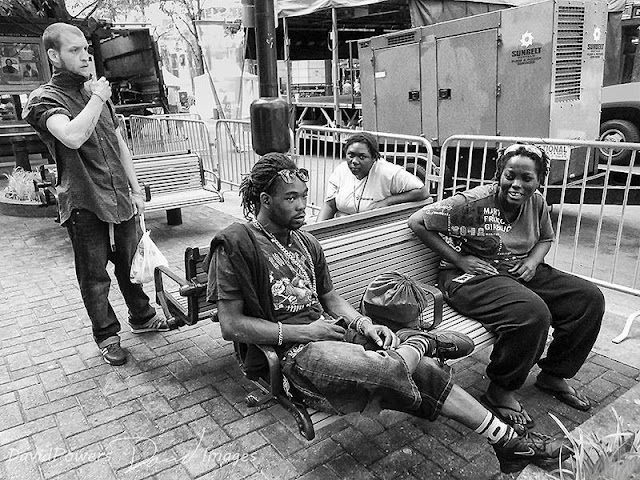 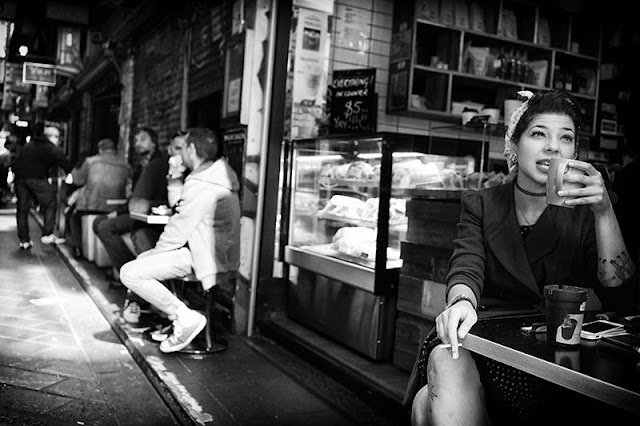 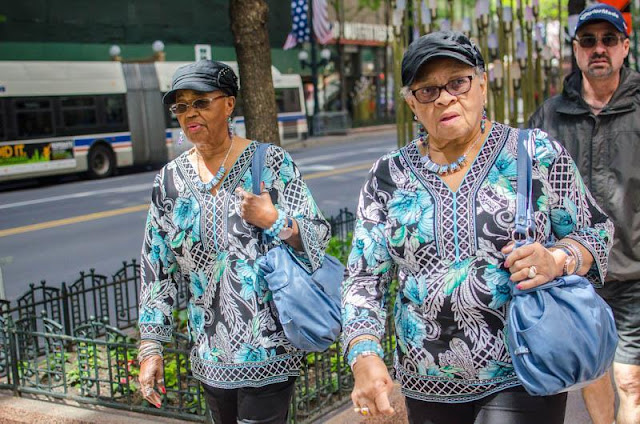 Let's see what they deliver next week!

Posted by Mason Resnick at 1:05 PM No comments:

In The Midst of Its Internet Resurgence, Has Street Photography Lost Its Meaning? 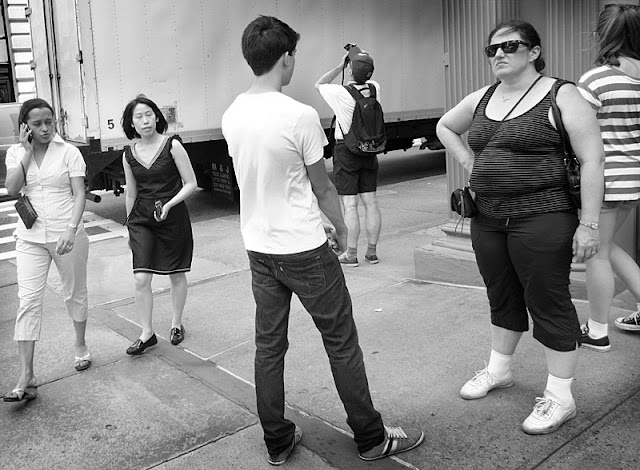 In the dark days of the 1980s and 1990s, it seemed like declaring the death of street photography was a mark of honor for photography critics. Indeed, in an age where Cindy Sherman and friends dominated the fine-art photography world with pre-visualized concepts that they used a camera to capture (they could just as well have used brushes and paint), the idea of capturing a sliver of time that was truly unique and photographic had fallen by the wayside.

Sure, there was plenty of spontaneous photography out there and much of it was very good. Sports and photojournalism were the last bastions of "straight" photography left. Of course those of us who continued shooting on the street non-stop never lost faith.

Then, in the 00's came the Web, and street photography started to get noticed again. 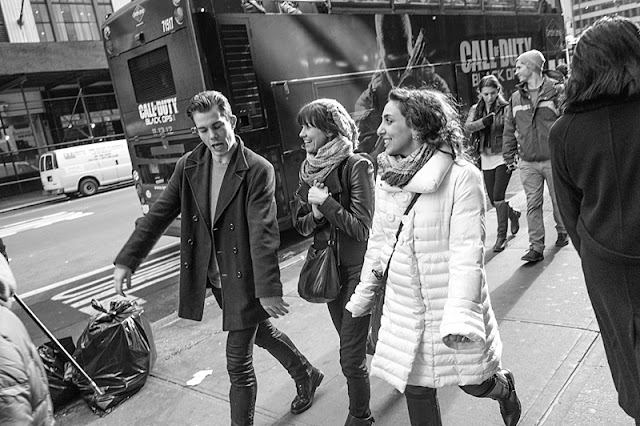 In the last few years came mirrorless, interchangeable-lens (and fixed-lens) compact digital cameras with eye-level viewfinders, manual focus and quick response time. At the same time, an explosion of photo-friendly social media such as Flickr, Instagram, Twitter, and Facebook have helped to spread street photography like never before.

Street photography, it seems, is back. More and more photographers want to learn about it. The term is bandied about on Facebook and Twitter, and there are numerous Facebbok and Flickr groups devoted to sharing and commenting on street photography. There's even a hashtag! After decades of obscurity within the world of photography and facing the upturned noses of the folks who Know Art, you can now search for #streetphotography.

And that's where we run into problems: When I search for #streetphotography, what I find is often anything but Street Photography. It seems many photographers are tagging their photos as street photography without having any real knowledge of what the term means. How do I know? I looked at the photographs.

So, let's define what street photography is, and is not—and tackle the gray areas and exceptions.

A street photo is a candid photo taken in a public place. That's it, really.

However, based on a rather discouraging hashtag search, I feel I must explain that street photography isnt (these are descriptions of actual photos I found that were hashtagged #streetphotography or #streetphoto):

• A posed photo of a person in a public place. That's an environmental portrait or street portrait.

• a nighttime photo of a city skyline from far away. That's a cityscape.

• a photograph of a building. That's an architecture photograph.

• a photo of three people drinking beer and smiling at the camera, which appears to be held by one of the people in the picture. That's a selfie.

Why would anybody think any of the above described photos (all of which were found in a single hashtag search on Twitter using #streetphoto and #streetphotography) were street photos? A few thoughts: 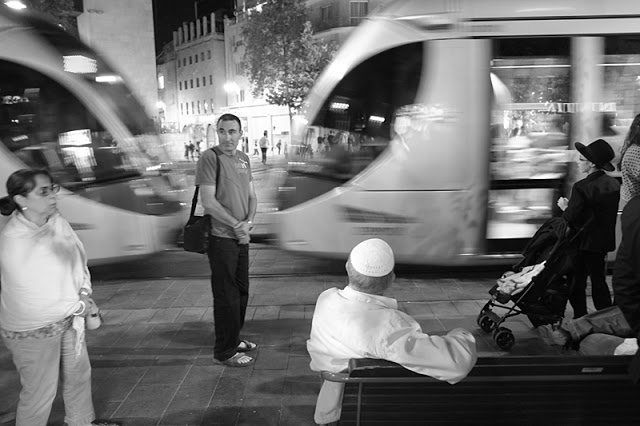 
Can there be trees, city skylines, buildings, flowers, weddings, trees and people drinking beer in street photos? Of course! But when they're isolated from anything else, and they're not playing off other elements in the photo, the definition of the kind of photo changes. I'm not saying any of the above were bad photos. Some of them were quite good! However, they do not fit the definition of a street photo.

Let's repeat that definition: Street photography is the act of taking candid pictures in public places.

Welcome to the gray area.

I think the gray area definition can be expanded to photos that are spontaneous and reflect the photographer's reflexes, rather than premeditated thought. Images that do not refer to previous images but show something new and uniquely photographic would probably qualify. Yes, you can shoot street photos in weddings—as long as you're staying off the script and getting unplanned and unselfconscious moments or interesting/funny/ironic juxtapositions, you're good.

Photographing a building or trees could also be street photography—if something else is going on within the frame at the same time. The interaction between elements within the frame (presumably some of those elements either human or animal) help an image deserve the #streetphoto tag.

While street photography has become a popular buzzword, as with so many creative endeavors that have jumped the shark, I fear it is losing its definition as folks who don't really understand it jump on the bandwagon.

The best offense, I believe, is knowledge, and sharing great examples of successful street photos. Sharing the works of the greats such as Garry Winogrand, Cartier-Bresson, recently discovered greats such as Vivian Meier, and relative newcomers such as Jeff Mermelstein, Richard Bram and others, is also a good way to focus people on what street photography is—and isn't.

Want to learn more about street photography from someone who has been doing it continuously since 1976? Check out my online class, "Street Photography: Making Chaos Interesting."
Posted by Mason Resnick at 8:46 PM No comments:

My hometown, Highland Park, NJ, is quite dog-friendly. Here's a photographic ode to some of our furry (or, in the case of non-shedders, hairy) friends. Interested in an on-location photo session with your dog? Email me at masonresnick@gmail.com!

(All photos © Mason Resnick and may be reproduced with written permission only.) 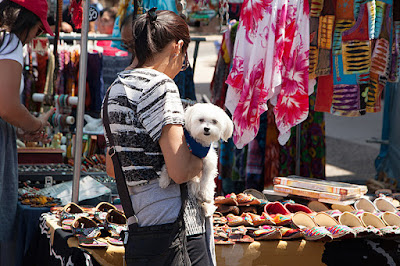 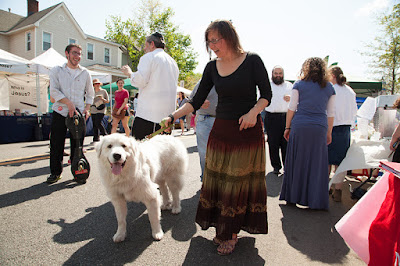 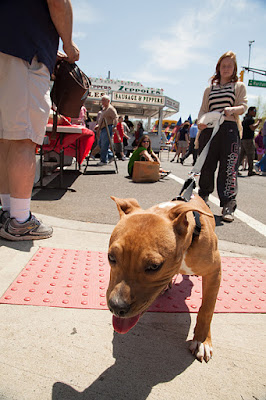 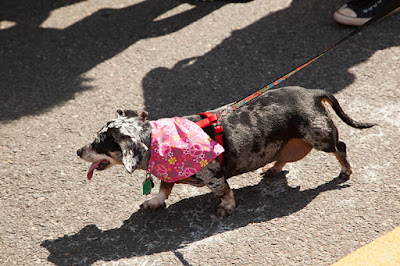 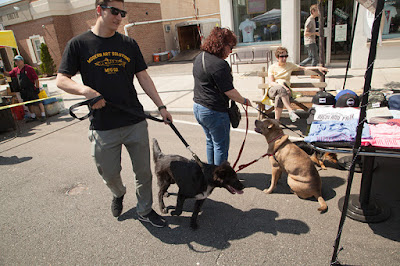 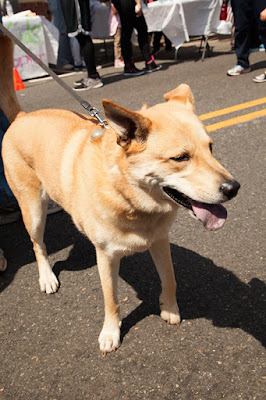 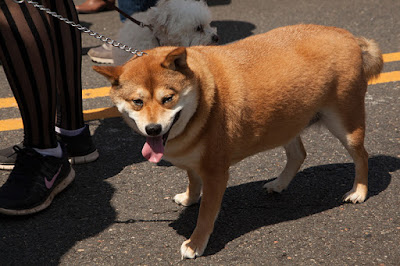 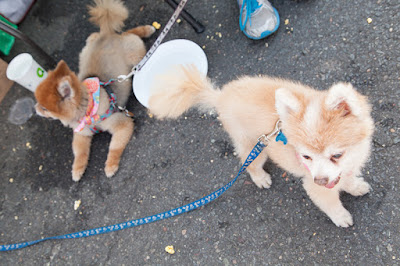 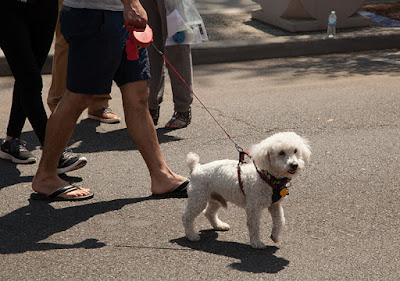 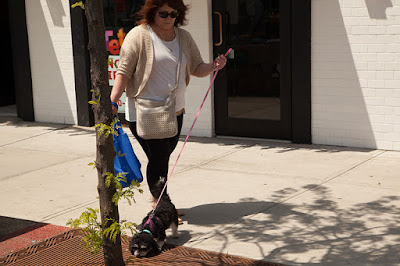 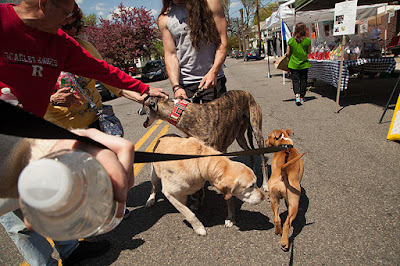 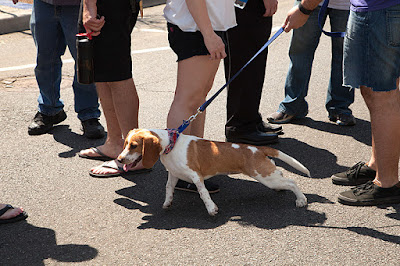 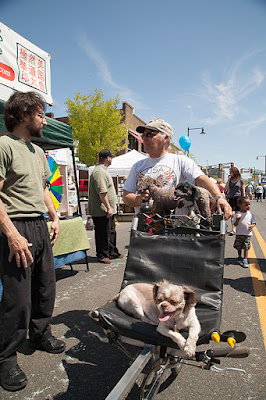 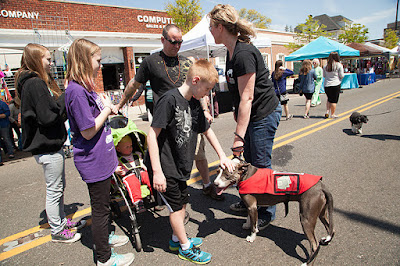 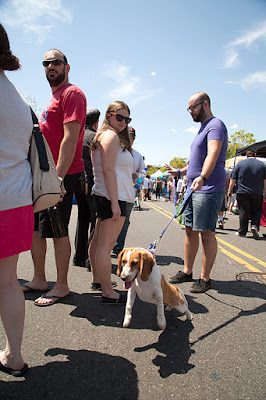 All photos shot on May 3, 2015 at the Highland Park Street Fair.


Posted by Mason Resnick at 3:44 PM No comments: