The Day I Sailed the Fuji Blimp

Since I'm starting up a new freelance photography business, I decided last week that I needed to clear my office. It was long overdue. I'm a pack rat, so this task took about a week, but it was not without its rewards and found long-forgotten treasures. One of the unexpected finds was as stack of photos I shot (on film!) to document one of the most memorable experiences I've ever had—an experience that I remind daughters about every time a blimp sails by.

It was an August day, probably 1992, that I sailed in—and, briefly, took the controls of—the Fuji Blimp. Here's my story—and a selection of the prints I found, with the blue atmospheric haze digitally color corrected. 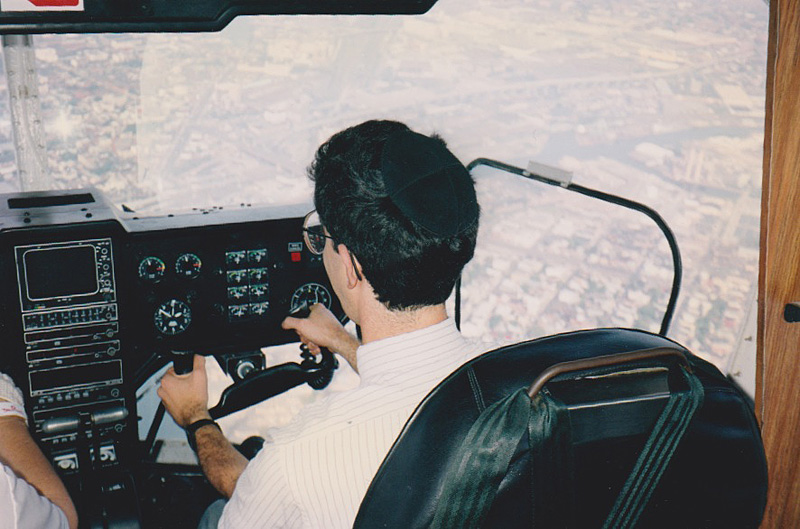 
Back up a few weeks. I was working at the time as the managing editor of Photo Business, a monthly trade magazine serving the photo retail industry (back when there were lots of camera stores and digital photography was a far-off fantasy that I correctly predicted would take over the world within ten years). My boss, the late, wonderful Bill Clark, told me Fuji had invited him for a press junket on their blimp, and would I like to go in his stead? Of course I said "yes." How could I say no to this once-in-a-lifetime experience? (The fact that Bill generously gave me his tickets just tells you a little about how awesome he was.) 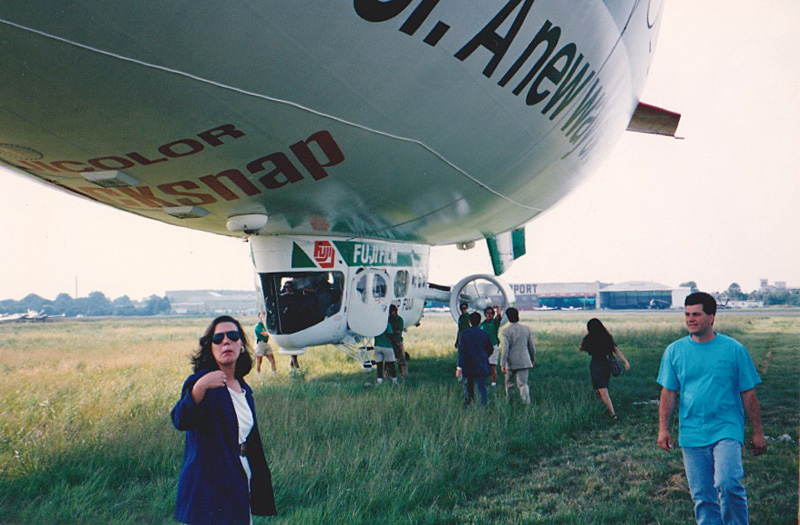 Let's go guys, stop taking pictures and get aboard! I don't remember the name of the Fuji PR person who coordinated the journey (in the blue blazer; any photo industry people reading this remember her?) but I thank her for making it so.


I went to a private airport in Linden, NJ at the appointed time, and there it was, the Fuji Blimp, floating a few feet above ground, tethered to posts, ready to fly. A dozen people—journalists and Fujifilm PR reps—got on board. The blimp was untied from its moorings, the huge and LOUD engines started up and tilted diagonally, and slowly we rose into the warm, hazy New Jersey air. 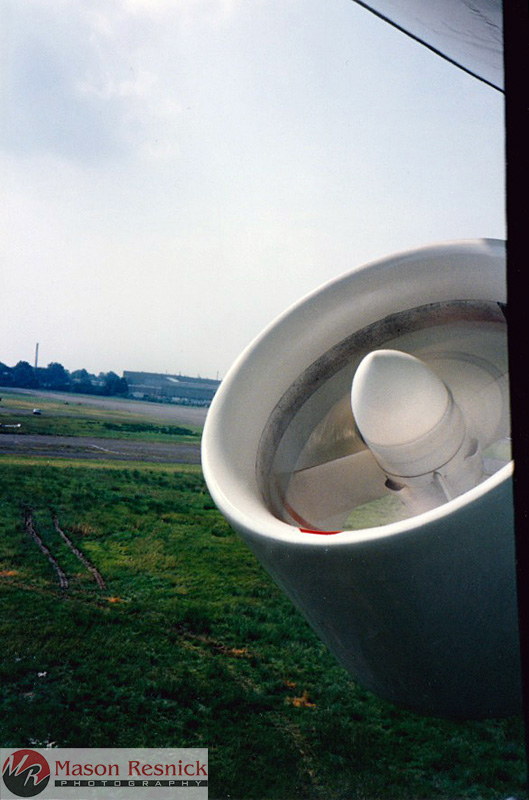 My, what big engines you have! As I recall, they're made by Rolls Royce.

Yes, we knew it was warm: Because we were only going about 20 knots per hour, we could open the window,  lean out (not recommended for those with acrophobia) and feel the wind in our faces—which we took turns doing as we jostled to take pictures from points of view that we all knew very few people would have the opportunity to see. 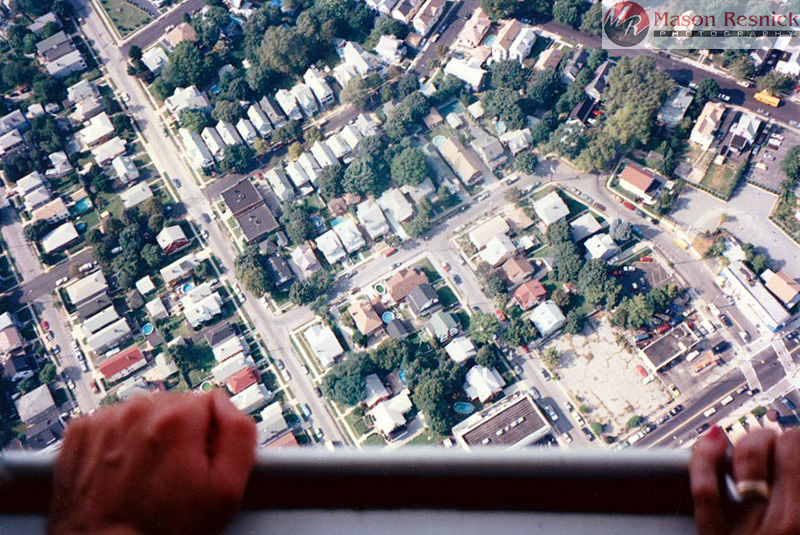 Look out below! Yes, that's an open window. If I'd dropped something, it might have landed on someone's head in Elizabeth, New Jersey.


Our route: We flew over Port Elizabeth, New York Harbor (including Ellis Island and the Statue of Liberty), hung a left and floated up the East River. We were having a blast, enjoying incredible views, and everyone was given a turn to sit in the co-captain's seat. 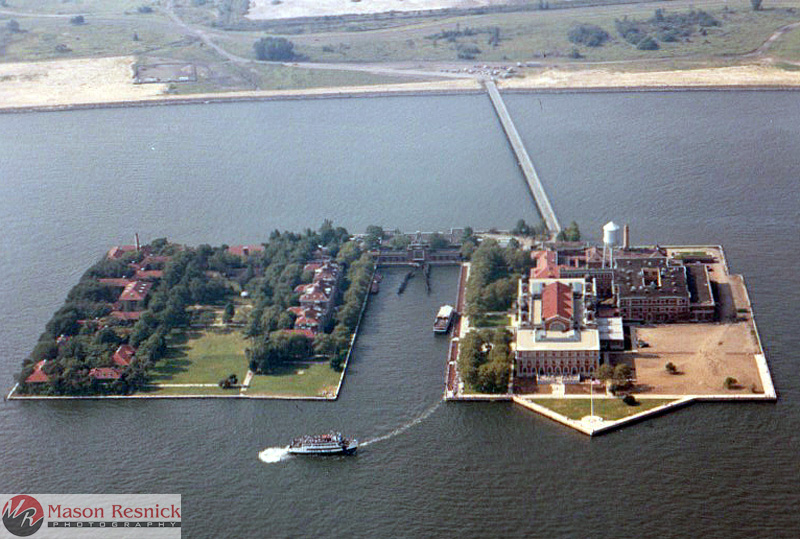 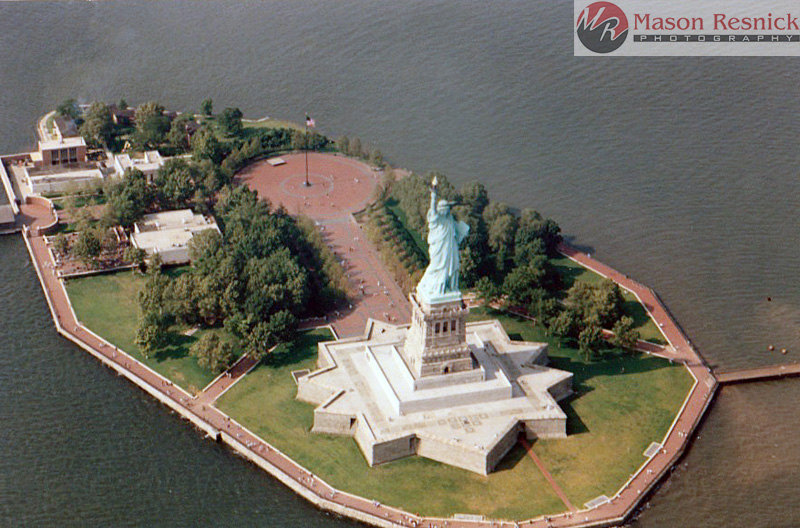 The Statue of Liberty. What you can't see in this image is that we were so close, we could see people in  her crown—and they were waving at us! 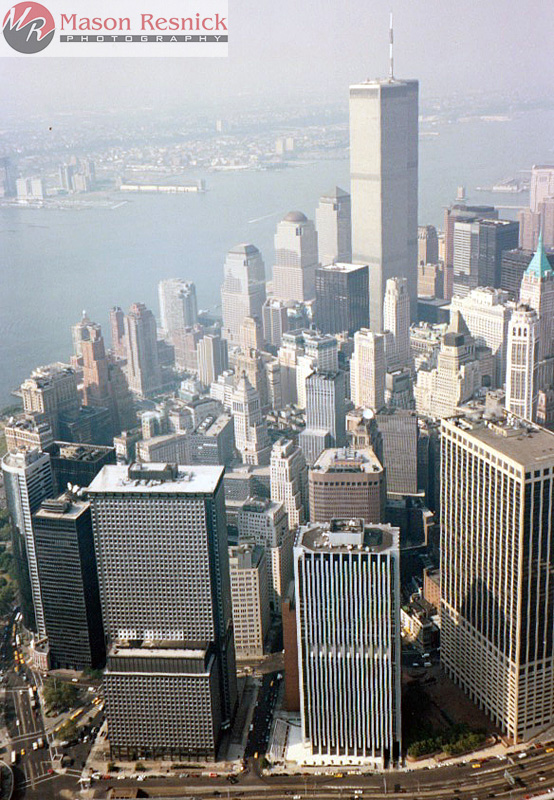 It didn't feel real: Lower Manhattan, as we sailed by slowly at 3,000 feet. 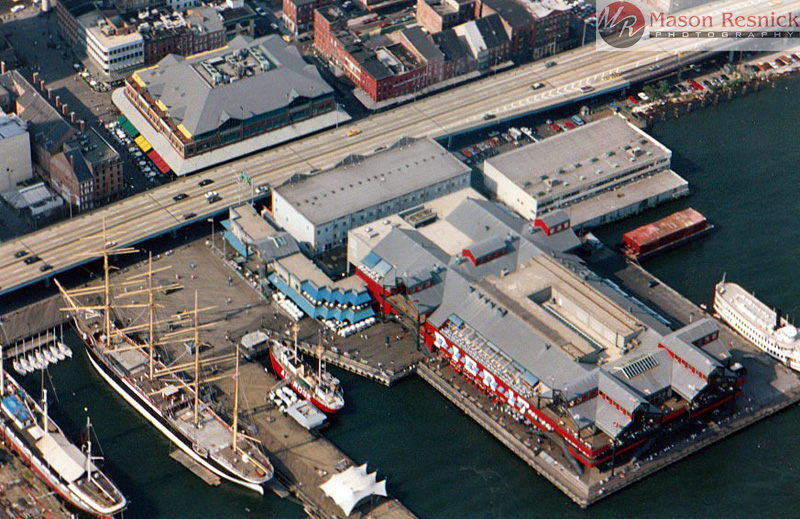 Hello, tourists! Pier 17 and South Street Seaport, and more people waving at us. 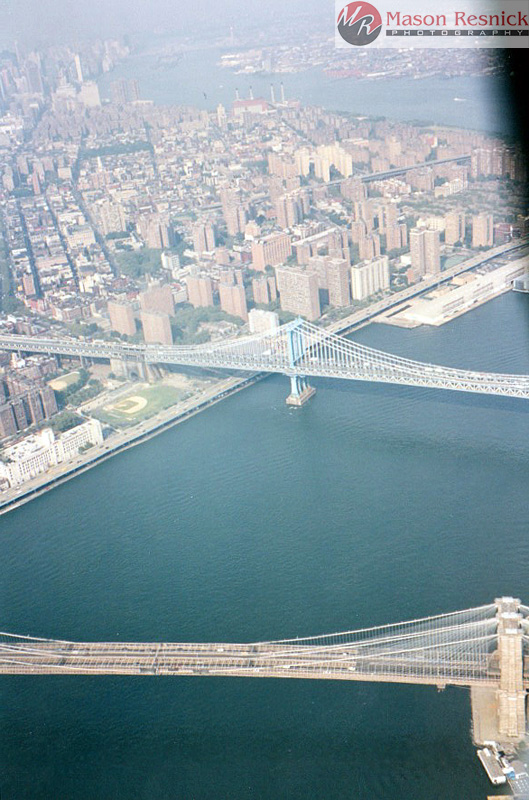 Neither one's for sale: The Brooklyn and Manhattan Bridges from high above. A few minutes later, the captain called me over...


The five most terrifying minutes of my life

Just after we sailed over the Manhattan bridge, the captain called me over. It was my turn to fly the blimp.

I sat in the co-captain's seat, assuming it would be not much more than a photo op. I was told how to use the controls (think steering in four dimensions) and then the captain took his hands off the controls and said "you can do it" and leaned back and relaxed as I freaked out, realizing that I was actually, myself, Sailing. The. Blimp! "Our altitude's a bit high. Take us down 500 feet," the captain instructed me. I started, gingerly, to tilt the ship down. Not enough. "Tilt it more," he said. "A LOT more." I did, and suddenly we were going down at what I swore was a 45-degree angle. "That's better," he said. I didn't think so. 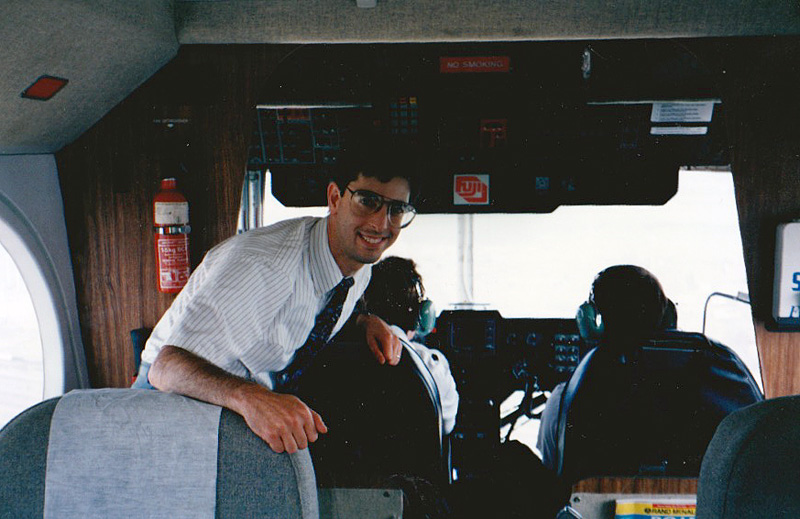 No longer sailing, and boy was I relieved!

I heard shouts from behind me: "Resnick! What the hell are you doing?" "Straighten it out! My drink's spilling" "Oh, the humanity!" and stuff like that (actually that last bit might have been me). This didn't help my composure or the high levels of moisture that suddenly appeared on my forehead. "The captain made me do it," was I'll I could respond as I fought to level off.

The next order: "Make a left and take us over Central Park."

This, I could handle.

And so I hung a left with relative ease—and at that point, the captain relieved me of duty, assuring me I did a great job. The reporter from TWICE took a turn, and I went back to a relative comfort zone: hanging out the window taking pictures at a height that even Joe McNally might be jealous of. 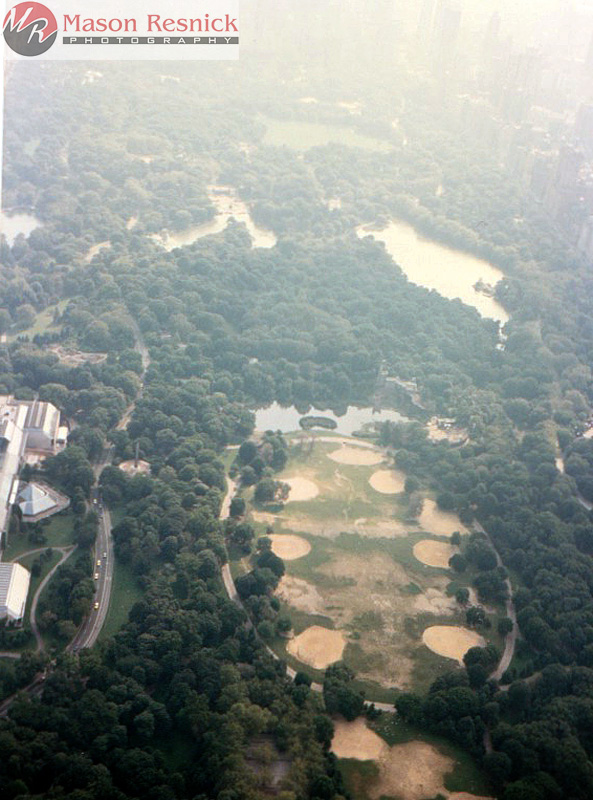 Central Park's softball fields: My first shot after sailing the blimp, once my hands stopped shaking.

The rest of the two-hour circuit went wonderfully. Sailing over Manhattan, the East River, the Hudson and New York Harbor with the summer breeze flowing through the cabin was an experience I never forgot and I am forever thankful to Bill Clark and the Fujifilm PR team for giving me this amazing experience that my kids are sick of me bragging about.

Looking at these photos after not seeing them for over 20 years, with all that has happened since, I was struck by the unique point of view of the World Trade Center's Twin Towers. In fact, there were a couple of shots I'd forgotten about and when I saw them, I got quite emotional. Especially when I found this one: 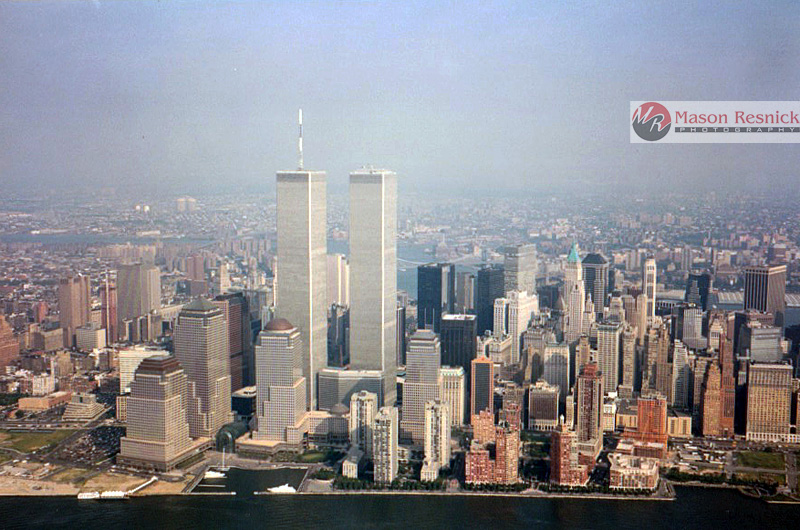 Here are some more photos I shot that day from the Fuji blimp. Enjoy! 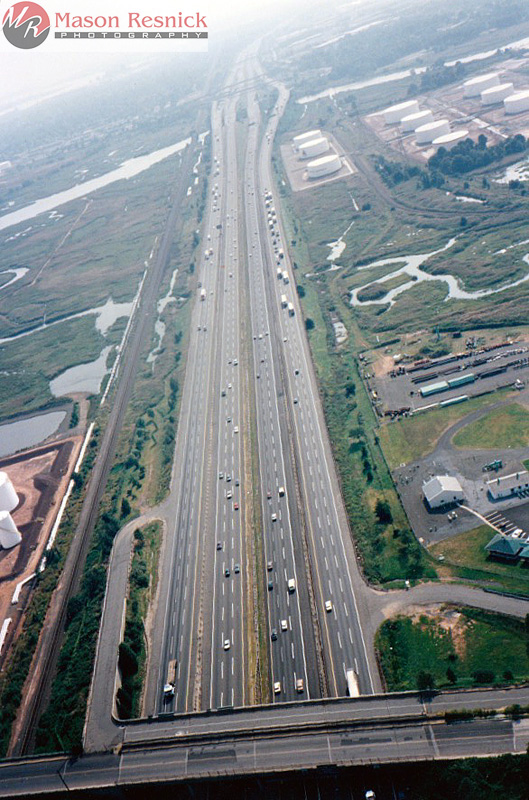 The New Jersey Turnpike, around Exit 12 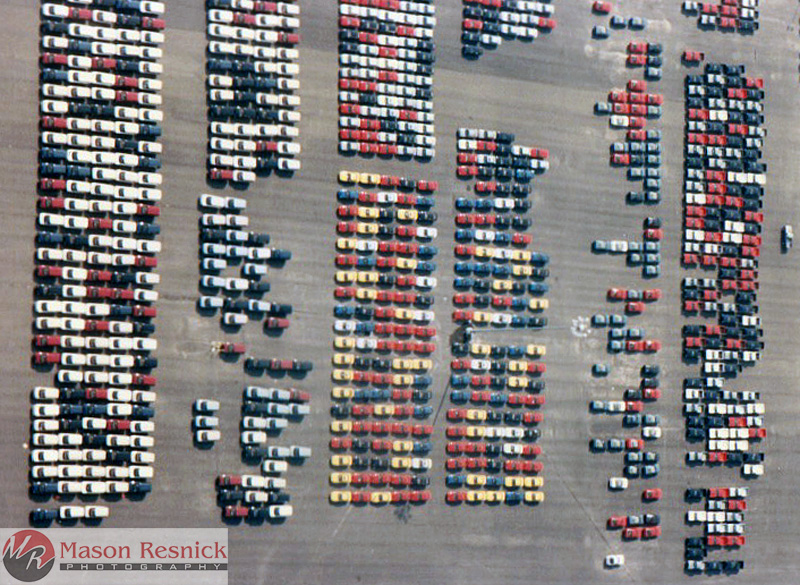 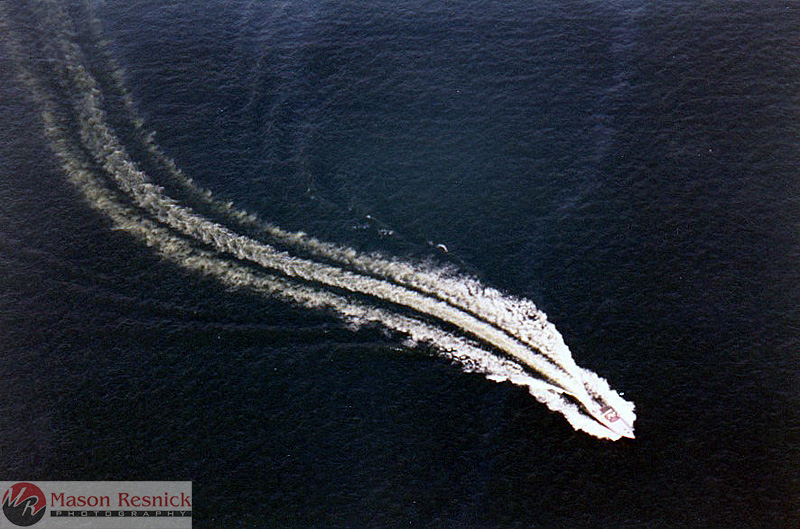 Speedboat in the East River. 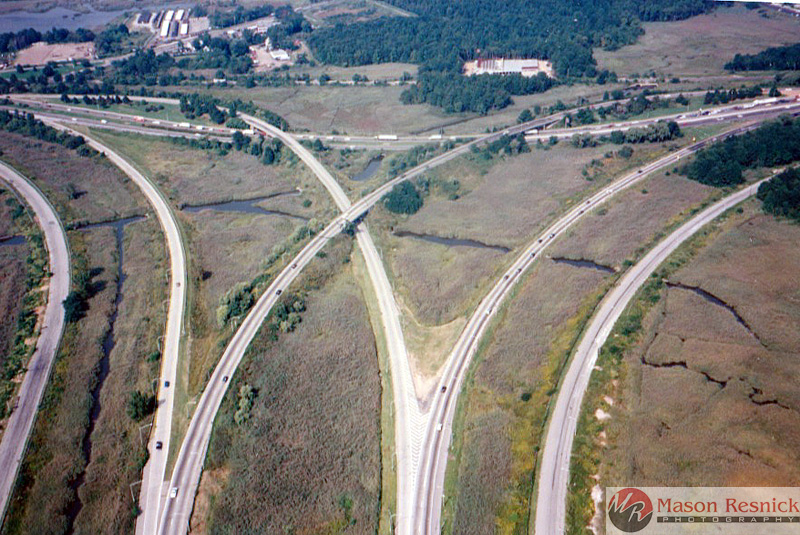 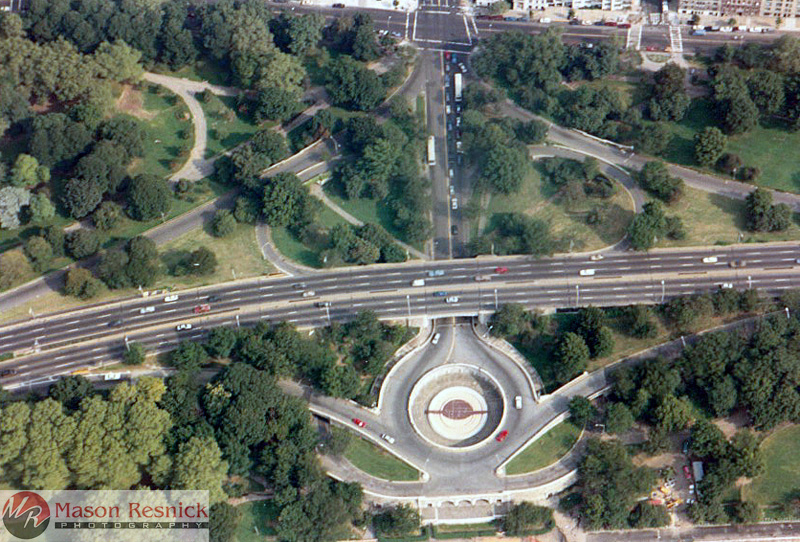 The West Side Highway, Manhattan. 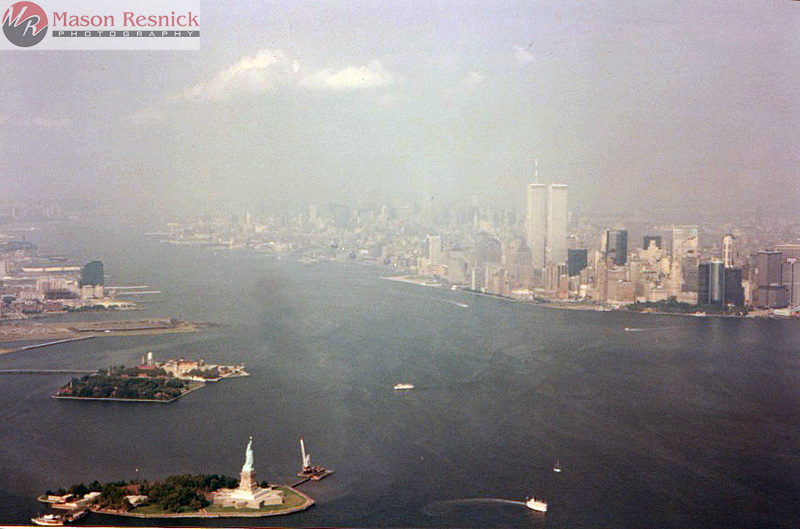 Goosebumps: I'm so glad I found this shot of New York Harbor with the Statue of Liberty, Ellis Island, and the World Trade Center all in one frame.